Determines the therapeutic efficacy of an antioxidant treatment with pharmacological or natural products.

The determination of Total Antioxidant Status assesses the integrated antioxidant system, which involves all biological components with antioxidant activity.

Your knowledge is of interest to:

Controlling oxidation status with balanced diet and supplementation by a specialist can benefit health and prevent certain diseases. 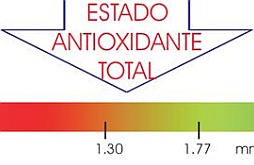 An antioxidant is a molecule capable of slowing or preventing the oxidation of other molecules. Oxidation reactions produce free radicals that damage cells. Antioxidants inhibit these reactions by modifying the free radicals or by oxidising themselves. These physiological defence systems are insufficient in the case of oxidative stress, characterised by a load of oxidised species and/or a deficiency of antioxidants. Oxidative stress has been associated with the pathogenesis of many diseases and physiological processes such as ageing, hence the increasing use of antioxidants as drug therapy, particularly in stroke and neurodegenerative diseases. Antioxidants are also widely used as ingredients in dietary supplements to maintain health and prevent diseases such as cancer and ischaemic heart disease.

We provide you with a report with the result of your test interpreted by a specialist physician, including comments and recommendations according to the result.

What does my result indicate?

A result below the usual reference range indicates that your antioxidant capacity is low and, in certain situations, not sufficient to inhibit the accumulation of free radicals in your body inducing the development of certain diseases in which oxidative stress is involved.

How is it done?

The determination of total antioxidants is a laboratory test using a colorimetric technique.

You can request the OXISCREEN test by calling us on 981 780 505. If you prefer, leave us your details using the following form and we will contact you: